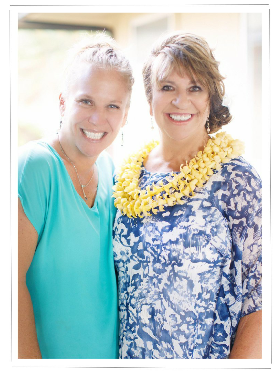 Makena Weddings is a full service Wedding Planning and Design company offering unparalleled service on the beautiful island of Maui, Hawaii. We enjoy meeting and working with couples from all walks of life and take pride in servicing clients with a variety of budgets; from small, intimate beach weddings to elaborate, luxury private estate events. Our goal is to make sure that our clients are completely satisfied and stress free throughout the planning process, and most importantly on the day of the wedding. Makena Weddings will work closely with you to select the best venue and vendors based on your event style and budget, while having fun along the way. 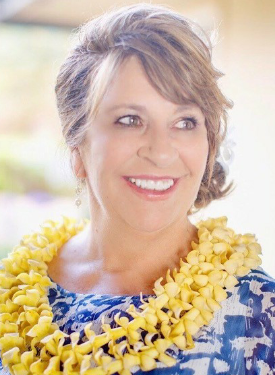 The owner of Makena Weddings since 2003 Laurie has worked with countless couples bringing their unique wedding visions to life. Whether it's just the bride and groom on a white sandy beach or an elaborate event at one of Maui’s oceanfront private estates, Laurie genuinely loves every aspect of the planning process with her couples. A true people person, Laurie will feel like a good friend when you finally meet, and on your wedding day, that is where Laurie really shines. From children to grandparents and everyone in between, Laurie fits in seamlessly and makes sure that everyone is comfortable and having fun while making sure that your event runs flawlessly and on time.

Originally hailing from Canada, Laurie grew up in a military family which meant constantly relocating, so she learned to make friends quickly and easily and saw each move as a new adventure. In her early 20’s, while living in Vancouver, BC, she was introduced to a handsome young Merchant Seaman from Hawaii. That young man was Al Terry. Madly in love, Laurie and Al married and made Hawaii their permanent home. After becoming settled in Hawaii, Laurie took an opportunity to work at one of Maui’s premier hotels and fell in love with the hospitality industry. That experience led her to embark on a career as an event planner, and soon after, Makena Weddings was born.

As a Wedding Planner and Designer, Cindy has planned hundreds of weddings and events here on the beautiful island of Maui. Drawing on her 20-years in the hospitality and event management industry, Cindy has developed a unique understanding of the diverse and unique needs of each couple that she works with. She is easily one of the friendliest people that you will ever meet and at the same time she has a passion for organization which combined together makes her a dream for our couples to work with. Cindy takes pride in executing a flawless event for her couples while also ensuring that on the day of the wedding, you enjoy every moment of your big day while she takes care of every last detail.

Originally from Colorado, Cindy has called Maui home for the last 31-years. Before joining Makena Weddings, she enjoyed a career in the Maui wedding & event industry as a caterer as well as owning and running her own restaurant. Still in awe that she lives in one of the most beautiful places on earth, she takes advantage of being in the outdoors as much as possible with her two kids, 3 cats and 1 dog. They love to spend time at the beach, enjoy life and travel as much as they can. 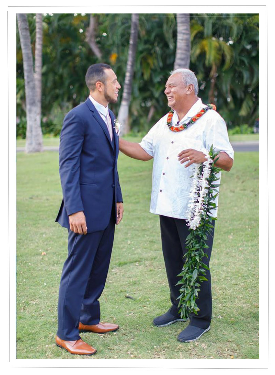 Reverend (Alapaki) Al Terry was born and raised in Honolulu, the oldest of seven children. After graduating from High School, Al became a Merchant Seaman, traveling the world until meeting the love of his life, Laurie, in Vancouver. Fifteen years after they settled in Maui Al left his job in construction and ventured into the world of entertainment; playing in a Hawaiian duo, performing at Maui weddings and events. It was during this time that he decided to become an ordained Minister and he began officiating weddings and vow renewals. God has blessed Al with an extraordinary gift for touching people in a very special way. Kind and caring, he embodies the true spirit of Aloha. In addition to officiating weddings and vow renewals, he dedicates babies and officiates at other blessings and memorials.